One of 10 photographs in the series: 23rd Annual Black Music and the Civil Rights Movement Concert available on this site. 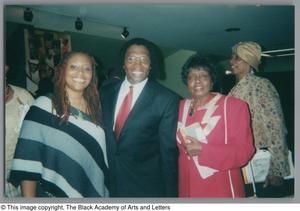 Person who is significant in some way to the content of this photograph. Additional names may appear in Subjects below.

The Black Academy of Arts and Letters Records

Event photographs from the Black Academy of Arts and Letters, Incorporated (TBAAL), a Dallas-based nonprofit. Some items in this collection are restricted to use by the UNT community.