[Nomai Family Video No. 6 - A Trip to the Panhandle] 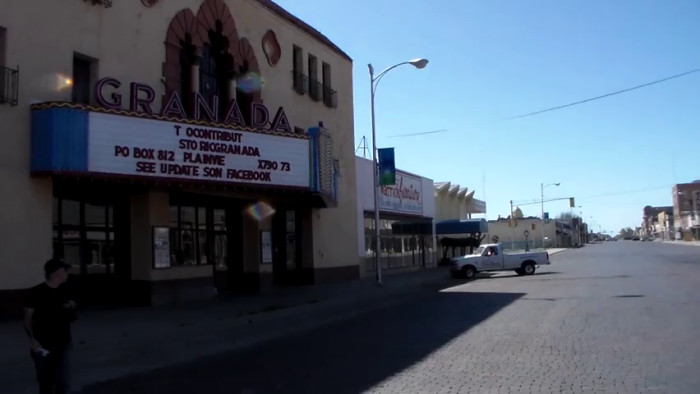 This video is part of the collection entitled: Spotlight on North Texas and was provided by UNT Media Library to The Portal to Texas History, a digital repository hosted by the UNT Libraries. It has been viewed 64 times. More information about this video can be viewed below.

This home movie documents Afsheen Nomai and Laura Treat’s road trip from Denton, Texas to the Panhandle region in March 2016 with stops in Decatur (00:07-01:14), Bridgeport (01:14-01:52), Jacksboro (01:52-03:01), Throckmorton (03:01-03:50), Haskell (03:50-04:34), Rule (04:34-05:28), Aspermont (05:28-05:41), Jayton (05:41-05:57), Post (05:57-06:44), Lubbock (06:44-07:43), Plainview (07:43-09:52), Happy (09:52-11:07), Canyon (11:07-11:44), Palo Duro Canyon State Park (11:57-12:28), Amarillo (12:28-13:47), Groom (13:47-14:06), McLean (14:06-16:08), Shamrock (16:08-16:55), Wellington (16:55-17:20), Childress (17:20-18:06), Quanah (18:06-18:22), Vernon (18:22-18:57), Electra (18:57-19:38). The film begins with Nomai and Treat driving into downtown Decatur, with footage of the courthouses square including the Wise County Courthouse and First National Bank. They next stop in downtown Bridgeport where footage includes a Dr. Pepper mural, a mural depicting a Butterfield stagecoach, and a banner announcing a downtown revitalization project. They then drive to Jacksboro where they drive past the Jack County Courthouse and stop at the Jack County Museum. Footage includes artifacts from the 4-H Clubs of Jack County. On their way out of Jacksboro, they stop to see a historical reenactment at Fort Richardson. They then drive into downtown Throckmorton where footage includes the Throckmorton County Courthouse. While driving into Haskell, they observe a large steel longhorn sculpture on the side of US 380. They drive through downtown Haskell where footage includes the courthouse square businesses, Haskell Free Press, Wild Horse Trading Post, the city’s water tower, and the Haskell County Courthouse. They then drive through Rule with footage of the downtown businesses, Fire Department, Rule Banking Center, water tower, and a residential area. Driving through Aspermont, footage includes a water tower, Dairy Queen, and windmill. In Jayton, footage includes the Jayton Café and city water tower. They then drive through downtown Post with footage of local businesses including the Post Dispatch and the Tower Theatre and a mural welcoming visitors to Post. In Lubbock, footage includes a District Depot mural and statue honoring Buddy Holly, over sized glasses at the Buddy Holly Center, The McCartney Oak, a Prairie Dog town created by K.N. Clapp, and windmills at the American Wind Power Center. They next drive to Plainview courthouse square where footage includes the Hale County Courthouse, a windmill and longhorn statue, a Dr. Pepper mural, the West Texas Walk of Fame with tiles for Claude and Wilda Hutcherson, Jimmy Dean, James E. “Pete” and Nelda Laney, and Keith Longbotham, the historic Granada Theatre with a marquis announcing its ongoing restoration, and the Plainview Daily Herald. They next drive to Happy with footage of the Harman Toles grain elevator, the city water tower, and local businesses including The Grand Theatre, Happy State Bank, and Happy Game Room. Business windows are painted for the Happy Cowboys football team. They then drive to the Canyon courthouse square with footage of local businesses, the Randall County Courthouse, and city water tower. They next stop for a hike in Palo Duro Canyon State Park. Driving into Amarillo, footage includes the Santa Fe building. In Amarillo, they stop at the Big Texan Steak Ranch and Big Texan Motel, Cadillac Ranch, and Tascosa Drive-In Theatre. At the Big Texan Motel, Laura reenacts a comedic Wild West scene with the motel room’s swinging doors. Driving through Groom, they observe the 19-story “The Cross of Our Lord Jesus Christ” and Britten Leaning Water Tower from the interstate. In McLean, they visit the Devil’s Rope Museum on Historic Route 66.Footage includes a recreated Route 66 diner and many exhibits of barbed wire. They also stop at the first Phillips 66 gas station in the State of Texas, the abandoned Avalon Theatre, and the McLean-Alanreed Historical Museum. In Shamrock, they stop at a restored Conoco fuel station and the U Drop In Café on historic route 66. Driving through downtown Shamrock, they stop at the Texas Theatre. They next drive through downtown Wellington where footage includes local businesses and a restored Ritz Theatre. They drive through downtown Childress with footage of the Hotel Childress sign, local businesses, and the restored Palace Theatre. They then drive through downtown Quanah with footage of local businesses shot from the car. They next stop in Vernon with footage of local businesses and the restored Plaza Theatre. The trip ends with a drive through Electra with footage of oil derricks, an homage to home video tropes, and footage of local businesses including Donna’s Movie Store. The film ends with Laura shooting footage of herself reflected in a window at a historic movie palace, The Grand Theatre, currently under restoration.