THE OLD MEXICAN FORT AT VELASCO.
ADELE B. LOOSCAN.
In pursuance of a policy inimical to the interests of American
colonists in Texas, and expressed in the decree of April 6, 1830,
Mexican forts were built at Anahauc and Velasco. In 1832 the Ve-
lasco fort was invested with a garrison of one hundred and twenty-
five men, under Colonel Dominic Ugartachea. Its location on the
east bank of the Brazos river, just where the river emptied into the
Gulf of Mexico, gave full command of all commerce entering the
river. History contains no charge of arbitrary conduct on the
part of Ugartachea, as was the case with Bradburn at Anahuac, and
it was only when the fighting qualities of the commander and gar-
rison bore the test of a severe battle that the fort became perma-
nent. The hotly contested and bloody engagement of June 26,
1832, confers upon Velasco an honorable place in the annals of
heroic warfare. The fort long remained a monument to the bravery
of the men, who participated in the battle, but history is silent as
to its subsequent uses. The question arises, was the fort repaired
and manned by the government of the Republic of Texas, and
when was it finally abandoned? A partial answer is contained in
the experience of an old and highly respected resident of Brazoria
county. Col. M. S. Munson, who, as a boy spent the summers with
his family at Velasco, recalls an incident connected with a fort at
that place occupied by a garrison of the Republic of Texas. While
the date of the occurence is not accurately fixed, it was some time
prior to 1841. The facts are as follows: Among the officers of
the fort at that time were Lieut. Redfield and Dr. Lynch, the lat-
ter held in high esteem as surgeon and citizen. One morning,
about sunrise, as young Munson looked from his bed-room window,
he saw a number of men not far from the house, and noticed that
pistols were given to two of them, who were placed at a short dis-
tance from each other. A duel was on hand, which resulted in the
death of Dr. Lynch, who fell at the first fire of Lieut. Redfield.
Dr. Lynch was a general favorite in the community, and his sud-
den death made a deep impression upon the witness. 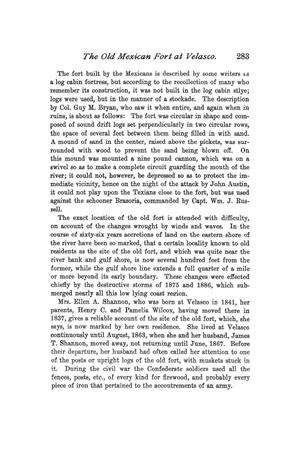 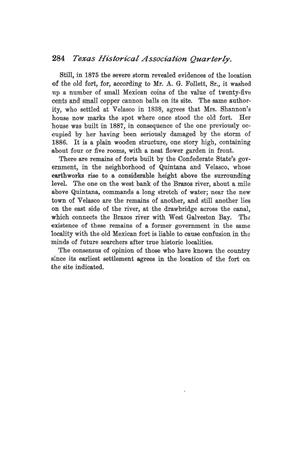 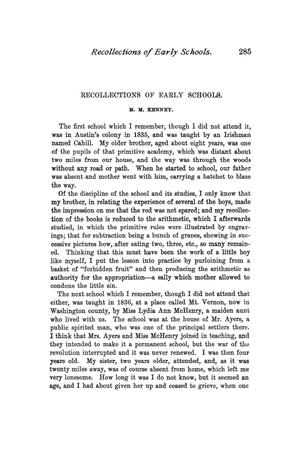 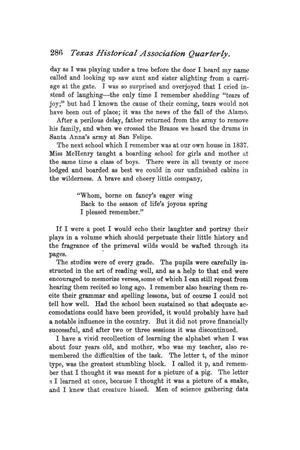