One of 667 photographs in the series: Historic Resources Survey of Palestine, Texas: An Inventory for The City of Palestine available on this site. 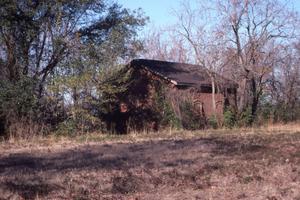 This photograph is part of the collection entitled: Rescuing Texas History, 2006 and was provided by Palestine Public Library to The Portal to Texas History, a digital repository hosted by the UNT Libraries. It has been viewed 84 times. More information about this photograph can be viewed below.

Photograph of the 600 Block S. May taken from the road. Photo was taken for the Historic Resources Survey of Palestine, Texas 1989-1991. Abandoned, overgrown with vegetation and in poor condition, this 1-story brick building housed furnaces for the Dilley foundry and is one of the only eight extant industrial properties in Palestine erected before 1945. This building was also once part of the studios of local artist Ancil Nunn. On one wall inside the building is a painted a rendition of the “Bright and Early Coffee” emblem that adorned coffee cans for years. It was painted directly onto the brick by Mr. Nunn. Illinois-native George Mansfield Dilley, the prominent railroad-building contractor who played an instrumental role in the expansion of railroads throughout Texas and the South, established a foundry at this site in 1873, one year after the railroad arrived in Palestine. The George M. Dilley & Son Foundry, located adjacent to the I&GN tracks, at one time contained more than ten buildings. The enterprise manufactured some farm equipment and machinery, but its primary output was gray iron and brass castings for Texas railroads. The elder Dilley moved to Dallas in the 1880s, but the foundry continued to be run by his son, George Edward Dilley – one of Palestine’s most prominent citizens of the late 19th century. G.E. Dilley continued operations at the foundry until his death in 1932; his son Clarence V. Dilley then took over until his own death five years later. In the mid-1930s, the plant had an average payroll of about twenty thousand dollars, for a workforce of twenty to twenty-five men. The foundry ceased operations in the late 1930s. All that remains today are the frame office building, this nearby brick brass furnace building, and a lengthy iron fence which borders the property and faces May Street (which local historians believe was named after G.M. Dilley’s infant daughter, Edna May Dilley, who died in 1872).