Bailey's Light: Saga of Brit Bailey and Other Hardy Pioneers 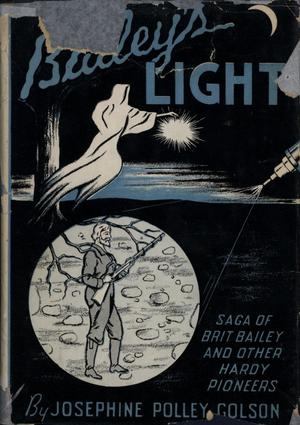 This book is part of the collection entitled: Women's Lives in the Southwest and was provided by the UNT Libraries to The Portal to Texas History, a digital repository hosted by the UNT Libraries. It has been viewed 269 times, with 14 in the last month. More information about this book can be viewed below.

Person who is significant in some way to the content of this book. Additional names may appear in Subjects below.

The UNT Libraries serve the university and community by providing access to physical and online collections, fostering information literacy, supporting academic research, and much, much more.

From book jacket: "BURY ME STANDING, facing West, with my gun at my side. All my life I have never looked up to any man, so I do not want it said, 'Here lies old Brit Bailey', but 'Here stands Bailey.'" Thus spoke Bailey before he made his final exit from the world. Indomitable to the end, fearless even on the threshold of the Great Divide, his sturdy spirit challenged death, for he continued, "When I awake, I wish to be facing West, and forward I shall march into the Great Beyond." In Bailey, Stephen F. Austin met his match. In this book you will find tales about their disputes and some of the reasons for the feud between them. The adventures of Brit Bailey and his family in the early days are stanger than fiction. Beginning with the year 1818, when Bailey came to Texas, the story continues on through the Civil War and Reconstruction Period. "Old Brit" was an iron man who survived and prospered despite overwhelming hardships. Almost as fearless as he were some of the members of his own household and hardy friends who featured in the dramatic events of those exciting days. One of the rare types of written lore that comes to publication all too seldom, this book preserves the true story of a turbulent era. Everything in this story is founded on facts - some have been passed down by word of mouth, and others have come from original documents and letters in the family's possession. Also, much hitherto unpublished materialcomes to light in this book. A fitting tribute to James Britton Bailey and his descendants, BAILEY's LIGHT is truly a treasure of Texana."

Women's Lives in the Southwest

Historical, biographical, autobiographical, and fictional books telling the story of women living in the southwestern United States in the late nineteenth and early twentieth centuries.