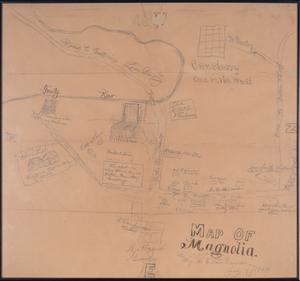 This map is part of the collection entitled: Rescuing Texas History, 2006 and was provided by the Palestine Public Library to The Portal to Texas History, a digital repository hosted by the UNT Libraries. It has been viewed 6733 times, with 210 in the last month. More information about this map can be viewed below.

Historical notes: When Magnolia was a thriving port in the 1870s, meeting the steamboats was a typical activity of the day. Now, the old townsite, situated on a high bluff above the Trinity River, is covered by brush and weeds. Large concrete blocks are the only visible signs left of the river trade that once tagged the town “Little St. Louis of the Trinity”. Named for a large Magnolia tree on the bank of the river, Magnolia was founded by settlers who moved there from Ft. Houston, located near Palestine, in Anderson County. After the danger of Indian attacks lessened, settlers began making land claims at Magnolia. During its heyday, the little town claimed 33 residential and business blocks with streets 60 feet wide. A drugstore, law office, blacksmith, shop, tavern, cotton gin, general merchandise and hotel made up the businesses. There was a one-room schoolhouse and a Methodist church.

The 800 odd citizens pointed with pride to the Hagood Hotel, reputed to be the finest between Shreveport and San Antonio. W.A. Hagood, owner of the two-story structure, advertised board and lodging for a man and two horses at $2 a night. Guests who signed the register of the hotel included General Sam Houston, Dr. H.H. Link, pioneer Palestine physician; Colonel George Wright, among the last to navigate the Trinity; Wade Allen and H.H. Dexter, land and slave owners from Alabama; and a Captain Foote, horse thief scout.

Hagood is remembered as the man who owned practically all of Magnolia. He operated the river ferry, was postmaster and owned the blacksmith shop and Magnolia Tavern. It was rumored that Hagood buried his fortune of $80,000 in gold coins under his hotel before he died. Even after Magnolia became a ghost town, fortune hunters who heard the legend searched unsuccessfully for the gold.

Another of Magnolia’s colorful citizens was Colonel George Wright. Wright, once mayor of Palestine, also served as “president” of the United States for 40 minutes while the President-elect (Benjamin Harrison) ate breakfast on the presidential train en route to Houston. Colonel Wright was one of the first to navigate the Trinity in a steamboat. One of his most interesting enterprises was the purchase of a steamship. The crew of the ship, the S.A. Ruthven, brought judgment against their captain for unpaid wages. A court order decreed that the ship be sold to pay off the men. It was auctioned off and bought by Wright for $900. During the spring of 1867 there were as many as six steamers docked at Magnolia. Supplies brought in on the freighters were sugar, molasses, flour and barrels of whiskey. Return trips carried cotton and cattle hides. Although the steamers offered passenger service, residents of Magnolia seldom depended on the irregular schedules.

On of the fastest river trips recorded was made in post Civil War days on the 184 ton side wheeler Early Bird. With 800 bales of cotton on board, the Early Bird made the journey down 500 miles from Magnolia to Galveston in four days. The trip overland by wagon would often take as long as six weeks. One of the last steamship trips up the river was a ship carrying a load of steel for the building of the I&GN Railroad.

With the operation of the railroad, river trade ceased and Magnolia began dying by degrees. By the turn of the century, there was little evidence left of the town’s romantic history. This map is the only known map in existence of the community. It was included in the collection of Mary Kate Hunter, which was originally donated to the Palestine Public Library. It was drawn on July 7, 1924 by S.C. Van Devender, who signed the map, and was his rendition of how the town was laid out as of 1860.