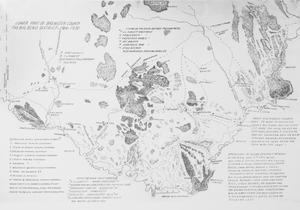 Reproduction of a hand-drawn map of part of Brewster County, Texas in the Big Bend region. It includes several annotations and identifies families and ranches in lower Brewster County Texas between 1916 and 1930, WWI quicksilver mines, and provides information on the Glenn Springs Raid of 1916.

This map is part of the collection entitled: Rescuing Texas History, 2006 and was provided by the Bryan Wildenthal Memorial Library (Archives of the Big Bend) to The Portal to Texas History, a digital repository hosted by the UNT Libraries. It has been viewed 1442 times, with 50 in the last month. More information about this map can be viewed below.

The Archives of the Big Bend seek to preserve, arrange, and make available the University archive, manuscript collection, books, and other research resources that pertain to the area west of the Pecos River and east of present-day El Paso County in Texas as well as the areas of northern Mexico.

Reproduction of a hand-drawn map of part of Brewster County, Texas in the Big Bend region. It includes several annotations and identifies families and ranches in lower Brewster County Texas between 1916 and 1930, WWI quicksilver mines, and provides information on the Glenn Springs Raid of 1916.

Additional biographical notes about the cartographer: W. D. Smithers, born in Mexico in 1895, was a photographer, amateur historian and botanist, and free-lance journalist of the Big Bend area of Texas. Between 1914 and 1919, he served with the U. S. Army in the Big Bend, first as a civilian muleteer, then as a wagon master. He later was an aerial photographer of the area and in the 1930s photographed the entire U. S. border with Mexico for the International Boundary and Water Commission. From 1936 to 1974, he operated a photography shop in Alpine, Texas, where he became known for lamp shades made of photographs. He recorded life along the Mexican border between 1914 and 1974 in maps, pictures, and a memoir, Chronicles of the Big Bend.