This newspaper is part of the collection entitled: The Brand (Hereford, TX) and was provided to The Portal to Texas History by the Deaf Smith County Library.

PAGE 1
The Hereford Brand, Hereford, Texas, Thursday, July 24, 1
reford Brand
ail...
iinued From
SENATOR RALPH
YARBOROUGH
ONDU
REVIV
•en 75 and 1CX
nocked out
■cording to a
teen.
rd Newell mt
his home, 10
r.
L, W. Comb
reported m
?r son Dick I
» house. Sh
as six inche
ugh irregula
* SOLDIER • JUDGE • STATESMAN
• , ' ■ e
(No more a true Tex&i than 9,127,000 others--opponent excepted!)
A LOYAL DEMOCRAT WHO EMBRACES THE PHILOSOPHY OF THE DEMOCRATIC
PARTY, AND WHO SUPPORTS ITS NOMINEES AND PLATFORM.
Rev
Rigid High Price Supports
Services
:h Night
at
SSEM
of G(
I III I
Determined that the American farmer shall have his fair share of the national income
ILL
is a cardinal principal of Democracy clad becomes demagoguery
ig is now
in indefiniti
of
kersfield
(Until they find the level of the Hoover depression)
88% of the nation's farmers voted for wheat acreage allotments - Yarbercugh considers
thirt mandate from the farmers.
d by popu
will rememt
rom post y<
MAJORITY RULE cnly when claimed as the private property of any individual.
The man on the left buildi and plows the soil of a family-sixe Texas farm
to provide food and fiber with which to feed and clothe the people of this
nation and the world. To do this, he must fight the weather, flood and
drouth, erosion and insects, high prices for what he buys and low prices for
what ha sells. To live and farm and provide for his family and the nation, ho
must also fight an antagonistic administration in Washington, which wants
to drive him off the farm to the city—where the same administration has
provided an army of unemployed for him to join. The man on the right
cannot do anything about the weather; «ut he helps his friend fight that
antagonistic administration in Washington—as hard and as effective as any
living man. The farmer's friend is Ralph. Yarborough, United States Senator
from Texas.
Yarborough s Farm Policy
Until a heifer farm program is devised Yarborough will and has supported
While his opponent would lei farm products "Find their price in a free market,'" with un- /doy
controlled production! 1
—
J» US FARMERS OF TEXAS RE-ELECT
ns like a I
independent
1 doesn’t hal
actions to s
;era themsel
liam A. BlaM
|)f his race fl
L Port Art At
I entered thi
Itcision. He I
from Texas, Ralph Yarborough/*
Senator Ralph Yarborough is regarded as
one of the most able Senators in Washington.
The Jacksonville (Texas) Daily Progress
said editorially: “Yarborough has been one
of the most able freshman senators ever to
appear in Washington. He knows Texas as
no other Texan, he knows the heartbeat of
the working man, the old age pensioner, the
oil operator, the small businessman. None
deny his ability, his worth to Texas, his cour-
the most able Senators m Washington by his
feHow members of the Senate. Senator Frank
Church of Idaho said of Senator Yarborough,
“I have often had the experience when lis-
tening to the junior Senator from Texas of
feeling my heart pound a little harder and
my pulse boat a little faster. I can only say
to him that the greatness of Texas is not in
its size but in its men, and one of the great-
Senator Ralph Yarborough is regarded as
one of the most able Senators in Washington
by his colleagues in the Senate. Senator Her-
man Talmadge of Georgia said of Senator
Yarborough, “I know of no member of the
Senate who has a more intense interest in
solving our farm problems and in seeing that
those who till the soil receive a fair share of
the national income/’ •
Senator Yarborough is regarded as one of est Texans of our times is the Junior Senator
age or integrity.”
Senator Yarborough has received high
praise from Texas business leaders. Ben Belt,
President of the Houston Chamber of Com-
merce, introduced Senator Yarborough be-
fore a large audience of businessmen with
these words, “Ralph Yarborough deserves
all our thanks. He's trying to learn what our
problems are so he can represent us well in
Washington. He'll make you the best leader
you ever had."
for by the Farmers of Deaf Smith County
* • < -..Vj-k* -.1 id.
JUJ
uties of
eing al
>preciat<
SENAT
A. JI. ••
TO THE UNITED STATES SENATE!
RALPH YARBOROUGH
IREU 451 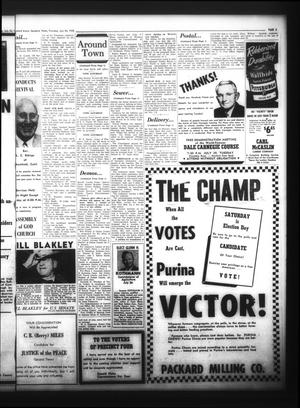 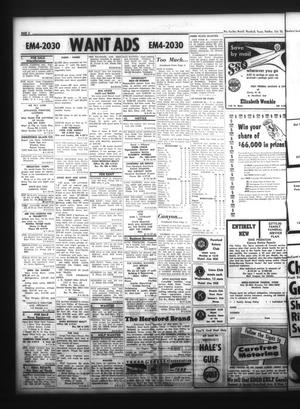 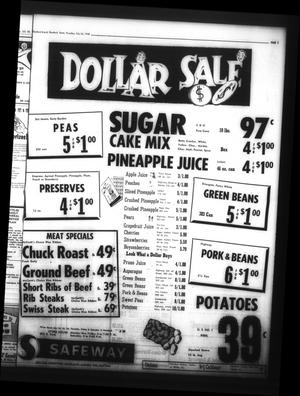 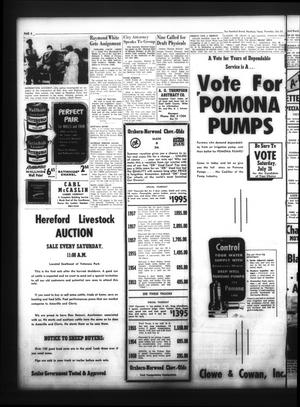