A geographically correct county map of states traversed by the St. Louis, Iron Mountain and Southern Railway and its connections. 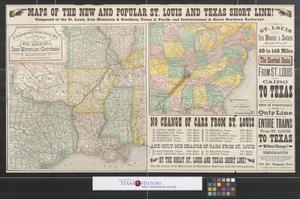 On verso: "Texas, by the Editor of this paper" [speech given at the Centennial Exposition in Philadelphia by R. B. Hubbard, Governor of Texas] plus eighteen additional panels with advertisements, time, and general information about the destinations, and excerpts of a speech given by R.B. Hubbard, Governor of Texas, at the Centennial Exposition, Philadelphia.