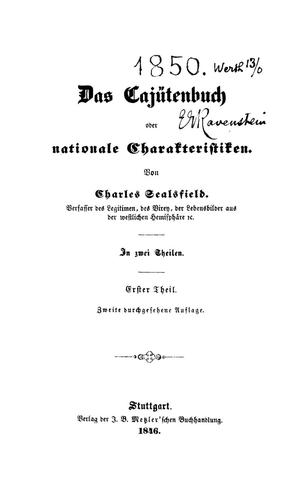 This German text is a historical novel about the creation of the Republic of Texas. It consists of a series of sketches that depict the new Republic of Texas as a land of opportunity for immigrants.

This book is part of the collection entitled: Texas Cultures Online and was provided by UT San Antonio Libraries Special Collections to The Portal to Texas History, a digital repository hosted by the UNT Libraries. It has been viewed 111 times. More information about this book can be viewed below.

UTSA Libraries Special Collections seeks to build, preserve and provide access to our distinctive research collections documenting the diverse histories and development of San Antonio and South Texas. Our collecting priorities include the history of women and gender in Texas, the history of Mexican Americans, activists/activism, the history of the African American and LGBTQ communities in our region, the Tex-Mex food industry, and urban planning.

This German text is a historical novel about the creation of the Republic of Texas. It consists of a series of sketches that depict the new Republic of Texas as a land of opportunity for immigrants.


Historical note about this book:

"The Cabin Book, which helped to motivate the Adelsverein and encouraged German migration to Texas, depicts a land both promising and dangerous, inhabited by legendary men, where 'you sow nails at night, and find horseshoes in the morning.' The work was immensely popular and remained one of the most widely read books in Texas throughout the nineteenth century. Highly derivative of the anonymous A Visit to Texas (1834), Sealsfield's heroic novel was the first important discussion of Texas in the German language; coupled with William Kennedy's Goethean Texas: The Rise, Progress, and Prospects of the Republic of Texas, which appeared the same year, it presents Texas as a rich field of opportunities. Although often considered overwhelmingly exuberant and optimistic, with a heavy admixture of manifest destiny, the book also warns that change and progress can be costly, even deadly, in personal terms. Some learned immigrants during Sealsfield's day took both the encouragement and the admonitions to heart. Approximately 100 printings of the novel, either as complete or revised editions or as excerpts in at least five languages, attest to its lasting appeal."
Glen E. Lich, "POSTL, CARL ANTON," Handbook of Texas Online (http://www.tshaonline.org/handbook/online/articles/fpods), accessed August 15, 2011. Published by the Texas State Historical Association.

The Cabin Book; or, Sketches of Life in Texas. (Book)

Relationship to this item: (Has Version)

The cabin book: or, sketches of life in Texas (Book)

Relationship to this item: (Has Version)

We appear to be missing data that makes this item searchable. We've logged the problem, but we'd also like to gauge interest in providing additional services with handwritten or non-English documents.
Request a Transcription Request a Translation