HISTORY OF DALLAS
By E. J. IEIST
Proprietor of the Daily Times-Herald

ALLAS was named for
the Vice-President ol
t h e United States
George Mifflin Dallas undei
the president James K. Polk
It was formerly known a:
Peters Colony which wa:
established under the instru
mentality of W. S. Peters
colonizing agent who had
contract with the governmen'
as did a number of others fo
colonizing tracts of land ir
northern Texas.
The first family to locat(
on the site of the present
city of Dallas was John Neel)
Bryan, a bachelor who was
a native of Kentucky. He came here in the fall
of 1841 with no other companion than his indian
pony that he had secured from the Cherokees and
pitched his tent on a spot near the present site uf
the County Court House. He was a man of sturdy
physique and sterling character, he lived on bear
and buffalo meat and such food as abounded in the.
forest and surrounding prairie. Six months later
Captain Gilbert and wife arrived and a little later
John Beeman with his family put in appearance.
The lonely Mr. Bryan welcomed thom. with open
arms and shared his provisions liberally with the new
arrivals. Shortly afterwards the host was awarded
for his hospitality by the gift of his former guests
fair daughter, Margaret Beeman for a bride. This
was the first wedding in Dallas. The three families
built rude huts of logs in which to live and
W. H. Beeman was the first man to break the ground
and start farming. The following year witnessed

Courtesy of Mrs. Charles Capy
First Brick (ourt House of Dallas, on Site of the Present
(Court Ilhouse. Pllotof:raph Taken in 1lS.7
the emigration of several families, most of whom
settled on the land around Dallas and engaged in
farming. Dallas was then a part of Nacogdoches
county with the town of Nacogdoches the county
seat over fifty niles away. The nearest shippin!

pint to Dallas was at that time Jefferson, one
hundred and seventy miles distant, over a very poor
road through the wilderness.
On March 20th, 1846 the Texas Legislature cret
r
S
t
r
I
I

A L iookng East, aDafllas, i
A View familiar to many Dallas Citizens

ated Dallas County with Dallas as the county seat.
Judge W. B. Ochiltree held the first court ever convened
in Dallas, he was the father of Tom Ochiltree,
who became a prominent figure in Texas history.
The first grand jury found sixty-one indictments, one
for murder, four for assault and battery and the
remainder for minor offenses.
The industries of Dallas grew rapidly, the first
Bank established was that of Gaston and Camp.
The first manufacturing plant was a carriage and
wagon shop by Maxine Guillot. The first mercantile
store was erected by J. W. Smith and J. M. Patterson.
The first saloon was opened by Adam
Haught. The first lawyer was John J. McCoy. The
first man to navigate the Trinity river was Captain
Gilbert. The first Grist Mill, a hundred barrel
a day plant was built by W. T. Overton. The first
hotel or tavern was run by John Beeman. James
A. Smith planted the first cotton seed in this district
in 1851 and in the autumn of that same year
built the first cotton gin that operated here. The
following year a boat load of cotton was taken down
the Trinity river as far as Porters Bluff.
In 1848 Nat M. Buford, one of the historic characters
of the early days of Dallas came to this
city, two years later he became district attorney in
the succeeding years he served as District Judge and
was one of the most prominent figures in the political
life of northern Texas.
The Dallas Herald the first newspaper, a weekly
was established in 1849 with J. Wellington Lattimer
shortly retired from the paper and Mr. Lattimer beand
a Mr. Wallace as proprietors. Mr. Wallace
came sole proprietor and editor. The Herald prospered
under the able pen and management of the
latter and was a political power and potent influence
for progress through the whole history of Dallas.
In the early files of the Herald are found many of
the interesting facts which have preserved for fu- 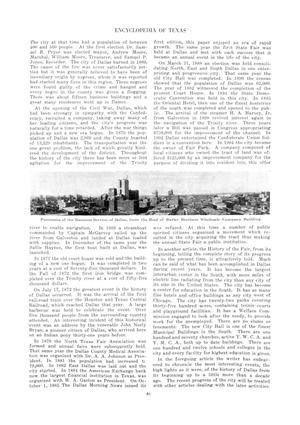 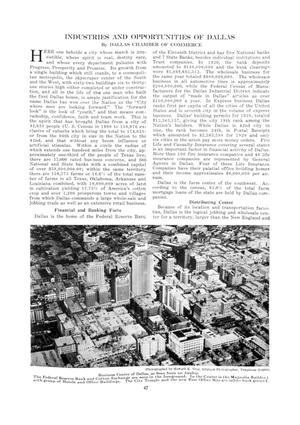 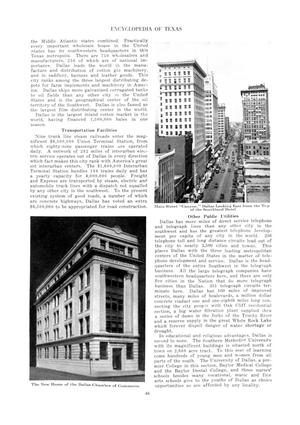 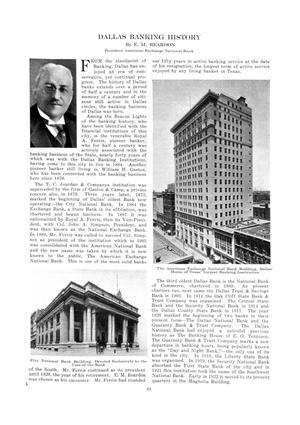