over enables the firm to offer the best and newest
goods on the market at a conservative price. The
firm is represented in New York by their buyers,
Kirby, Bloch and Fisher, at 252 Fourth Avenue. In
addition to Mr. Hirschberg and Mr. Migel as president
and vice-president of Goldstein, Migel Company,
A. M. Goldstein is secretary and treasurer of
the firm.
Louey Migel was born at Riga, Russia, the twentysixth
of September, 1869, son of Marcus and Bell
Migel, who came to America in 1870. The elder
Mr. Migel engaged in the cotton business at Galveston,
and here Louey Migel was educated in the
public schools of that city. After leaving school
he went in the dry goods business at Waco where
he spent eight years, at the time of his marriage
moving to Palestine, where he lived for two years,
later returning to Waco and establishing the present
firm.
Mr. Migel was married at Waco in 1886 to Miss
Rebecca Goldstein, sister of the late I. A. Goldstein,
who was until his death Mr. Migel's business partner.
With the exception of two years, Mr. and Mrs.
Migel have made Waco their home where they have
been members of their representative social life, and
their beautiful home has been known for its gracious
hospitality. Mr. Migel has at all times given his
energy to the development of his community and has
been identified with many religious movements of
the Hebrew faith. He was for twenty-nine years
president of the Congregation of Rodef Sholom, taking
deep interest in the congregation and working
indefatigably in their behalf. He has also been, and
still is treasurer of the Hebrew Benevolent Association,
and is a member of the Progress Club. Mr.
Migel is an active worker in the Chamber of Commerce,
where he has been treasurer and director for
over thirty years. He is a member of the Young
Men's Business League, one of the original organizers
of the Texas Cotton Palace Association, of
which he has been treasurer since organization, and
a member of the Elks Club.
OHN A. PENLAND, although he had retired
from active business life at the time of his
removal to Waco, in the decade of his citizenship
here gave his interest to civic affairs,
supporting movements for the improvement
of public welfare liberally. Mr. Penland was for
thirty-five years a resident of the Lone Star State,
coming here from North Carolina, and locating in
Fannin County, near Whitewright. Here he gave his
time to agricultural pursuits, attaining a reputation
as a progressive farmer, and amassing extensive
farm interests. Later he moved to Whitewright,
to give his sons better educational advantages, and
made that place his home for twenty-five years,
still retaining ownership of his many farms. He
then retired and came to Waco, in 1910, where
he spent his remaining years.
Mr. Penland was born in North Carolina, the
twenty-eighth of May, 1851, son of Harvey and Patience
Penland. He was educated in the schools
of Hicksville, now known as Haysville, North Carolina,
and after leaving school was for many years
a farmer and cattleman in that state.
Mr. Penland was married at Haysville, North
Carolina, the twenty-first of August, 1871, to Miss

Sallie Truett, sister of Dr. George W. Truett, of
Dallas, one of the best loved ministers of the Lone
Star State. Mr. and Mrs. Penland had an ideal
home life, rearing seven sons, each of whom has
taken his place in the business world as a man of
outstanding ability. These sons were all born in
North Carolina, but spent their boyhood in Texas,
receiving their education in the schools of this
state. These sons are: R. L. Penland, who is married
and has three children, J. M. Penland, C. N.
Penland, who is married, Arthur N. Penland, a druggist
in Corsicana, Wm. H. Penland, Paul Penland,
of Dallas, and who is married and has three children
and G. H. Penland, an attorney of Waco, and
who is married and has three children.
Mr. Penland died the sixteenth of November, 1920,
at his home in Waco, his death being a distinct
loss to this city where he had been so liberal in
his support of all worthy causes, and a sincere
friend to a wide acquaintance.
AMES M. PENLAND has been for a number
of years one of the most active leaders
in civic affairs at Waco, and also has been
identified with many commercial activities
of more than local prominence. The Waco Drug
Company, of which Mr. Penland is President, is a
large wholesale drug company, handling extensive
business interests in a two hundred mile radius of
Waco. The firm was established in 1911 and incorporated
for one hundred and fifty thousand dollars,
which has since been increased to four hundred thousand
dollars. They serve a wholesale trade exclusively,
handling a complete line of drugs and sundries,
and have fourteen salesmen on the road, besides
catering to a large local trade. The company
has enjoyed a continuous era of unprecedented success.
The Waco Drug Company is housed in a
building owned by the firm, and comprising a modern
five-story brick structure sixty by ninety feet.
The firm is contemplating material expansion, and
with this in view has purchased an adjoining ninety
feet, and the near future will see an addition on
this property. In addition to Mr. Penland as President,
the officers of the Waco Drug Company are,
M. A. Sullivan and C. S. Appell, Vice-Presidents,
and R. M. McDaniel, Secretary and Treasurer.
Mr. Penland took a lead in the organization of
the Waco Dry Goods Company, the Miller Cotton
Mills and the Waco Twine Mills and as a director
has contributed much toward the success of these
companies. He is a director of the South Bros.
Trunk Company.
Mr. Penland has at all times taken a deep interest
in the progress and development of Waco and has
given freely of his services and means to further
every progressive movement inaugurated here. He
was President of the Chamber of Commerce for
two years at the time the aviation and large army
camps were brought to Waco and his competent and
efficient service during this time contributed much
to the welfare of the community. During the war
he was also chairman of the War Savings Committee
of McLennan County and served untiringly
on this committee. He is now Vice-President of the
Chamber of Commerce and gives largely of his time
to the work of this organization. Mr. Penland was 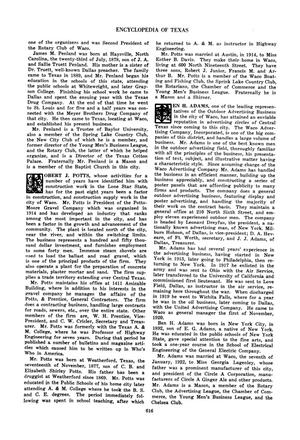 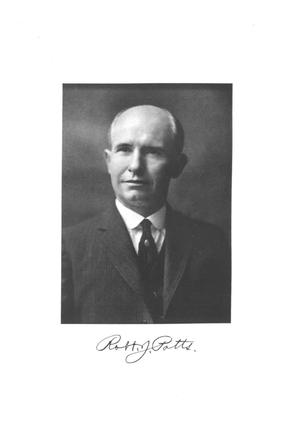 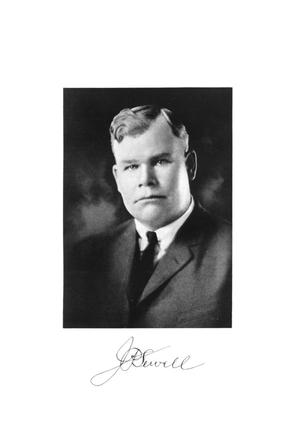 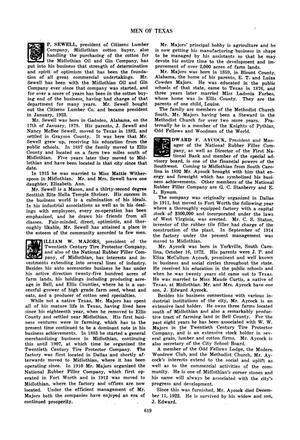