[Transcript of Letters Between Moses Austin and Francois Vallé, April 1802] 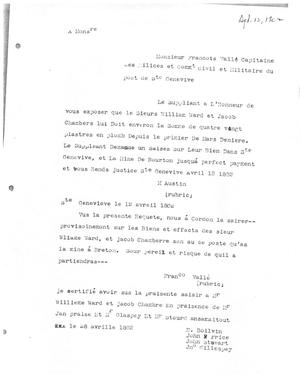 This letter is part of the collection entitled: Moses and Stephen F. Austin Papers and was provided by the Dolph Briscoe Center for American History to The Portal to Texas History, a digital repository hosted by the UNT Libraries. It has been viewed 14 times. More information about this letter can be viewed below.

People and organizations associated with either the creation of this letter or its content.

People who are significant in some way to the content of this letter. Additional names may appear in Subjects below.

Check out our Resources for Educators Site! We've identified this letter as a primary source within our collections. Researchers, educators, and students may find this letter useful in their work.

The Dolph Briscoe Center for American History is an Austin-based organization that collects, preserves, and provides access to materials relevant to Texas and U.S. history. It operates within the public services and research components of the University of Texas at Austin.

Descriptive information to help identify this letter. Follow the links below to find similar items on the Portal.

Unique identifying numbers for this letter in the Portal or other systems.

This letter is part of the following collection of related materials.

Personal and official records of Moses Austin and his son Stephen F. Austin, also known as "The Father of Texas." They cover significant events in Texas history, from colonization and the revolution to the early Republic of Texas.

What responsibilities do I have when using this letter?

Dates and time periods associated with this letter.

When was this letter last used?

Geographical information about where this letter originated or about its content.

Interact With This Letter