Program of the Regional State Convention of the League of United Latin American Citizens, August 29, 1943 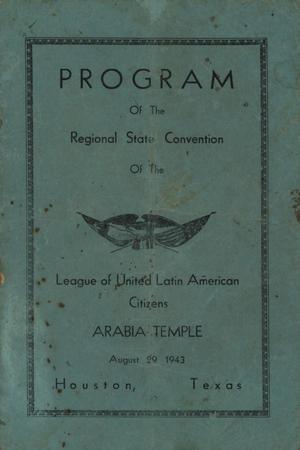 Program for the League of United Latin American Citizens Regional State Convention held at the Arabia Temple in Houston, Texas, on August 29, 1943.

This pamphlet is part of the collection entitled: Texas Cultures Online and was provided by the Houston Metropolitan Research Center at Houston Public Library to The Portal to Texas History, a digital repository hosted by the UNT Libraries. It has been viewed 35 times. More information about this pamphlet can be viewed below.

People and organizations associated with either the creation of this pamphlet or its content.

Check out our Resources for Educators Site! We've identified this pamphlet as a primary source within our collections. Researchers, educators, and students may find this pamphlet useful in their work.

The Houston Metropolitan Research Center (HMRC) is part of the Houston Public Library System's Special Collections Division which also includes the Clayton Library Center for Genealogical Research and the African American Library at the Gregory School.

Descriptive information to help identify this pamphlet. Follow the links below to find similar items on the Portal.

Program for the League of United Latin American Citizens Regional State Convention held at the Arabia Temple in Houston, Texas, on August 29, 1943.

Unique identifying numbers for this pamphlet in the Portal or other systems.

This pamphlet is part of the following collections of related materials.

What responsibilities do I have when using this pamphlet?

Dates and time periods associated with this pamphlet.

When was this pamphlet last used?

Geographical information about where this pamphlet originated or about its content.

Interact With This Pamphlet