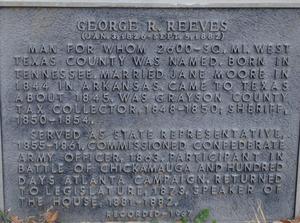 This photograph is part of the collection entitled: Texas History Collection and was provided by the Private Collection of Carolyn West to The Portal to Texas History, a digital repository hosted by the UNT Libraries. It has been viewed 215 times, with 4 in the last month. More information about this photograph can be viewed below.

The private collection of Carolyn West consists of a photographs of historical markers and related buildings in Grayson County.

Drawn from collections at the UNT Libraries and various partners, these materials about Texas history include artifacts, books, documents, manuscripts, photographs, maps, letters, and more.