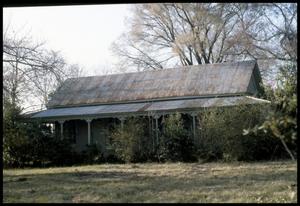 This photograph is part of the collection entitled: Rescuing Texas History, 2007 and was provided by Palestine Public Library to The Portal to Texas History, a digital repository hosted by the UNT Libraries. It has been viewed 159 times, with 4 in the last month. More information about this photograph can be viewed below.

This building originally housed the offices for the Dilley foundry. At one time it housed the studio of local artist, Ancil Nunn, but since his death has remained vacant. In form, this 1-story frame building resembles a center-passage dwelling. The property displays only modest amounts of architectural ornamentation but appears to be virtually unaltered. Despite its poor condition, the building retains its historic integrity and character to a noteworthy degree. Illinois-native George Mansfield Dilley, the prominent railroad-building contractor who played an instrumental role in the expansion of railroads throughout Texas and the South, established a foundry at this site in 1873, one year after the railroad arrived in Palestine. The George M. Dilley & Son Foundry, located adjacent to the I&GN tracks, at one time contained more than ten buildings. The enterprise manufactured some farm equipment and machinery, but its primary output was gray iron and brass castings for Texas railroads. The elder Dilley moved to Dallas in the 1880s, but the foundry continued to be run by his son, George Edward Dilley – one of Palestine’s most prominent citizens of the late 19th century. G.E. Dilley continued operations at the foundry until his death in 1932; his son Clarence V. Dilley then took over until his own death five years later. In the mid-1930s, the plant had an average payroll of about twenty thousand dollars, for a workforce of twenty to twenty-five men. The foundry ceased operations in the late 1930s. All that remains today are this frame office building, the nearby brick brass furnace building, and a lengthy iron fence which borders the property and faces May Street (which local historians believe was named after G.M. Dilley’s infant daughter, Edna May Dilley, who died in 1872).

The 2007 edition of Rescuing Texas History brings together photographs, postcards, letters, and more to give a glimpse into the rich history of the state.