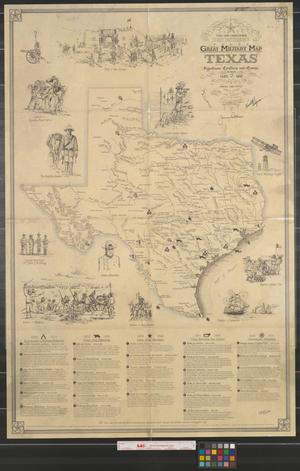 This map is part of the collection entitled: Map Collections from the University of Texas at Arlington and was provided by University of Texas at Arlington Library to The Portal to Texas History, a digital repository hosted by the UNT Libraries. It has been viewed 752 times, with 9 in the last month. More information about this map can be viewed below.

Text: "This map is in honor of Texas veterans', past and present, whose courage and sacrifice will never be forgotten."

UT - Arlington copy a is a limited edition print, no. 037/250 and is signed in manuscript by Patterson, Helgren, and Kilpatrick.

Tell us if you know the precise location of this item. In the lower-left corner of map below, select either the pin () or the box (). Use the cross-hair to drop a pin or drag to create a new rectangle. You can zoom in, expand to full screen, change the terrain type, or in some cases switch to street-view so that it's easy for you to determine the coordinates.