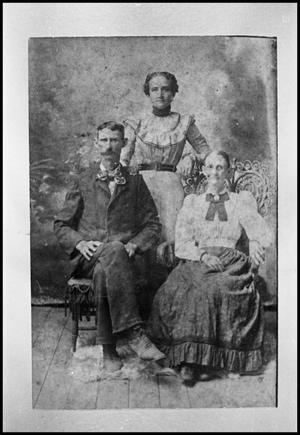 People who are significant in some way to the content of this photograph. Additional names may appear in Subjects below.

"Mary Jane Bowling was a patriotic "Civil War wife". She saw her husband Larkin Sanders Bowling leave home to serve int he Confederate Army. She was left to manage for herself and her three-year-old daughter, Julia Ann and son, Joel Smith. She was expecting a third child (William Sanders).

Mary Jane lost a twin brother Wm. P. Hoover in the war. Her husband and brother-in-law Jarrett Bowling served with the CSA until the close of the war and returned safely to their families.

Larkin and Mary Jane lived at Gallatin, Texas and are buried there in the Henry Cemetery.