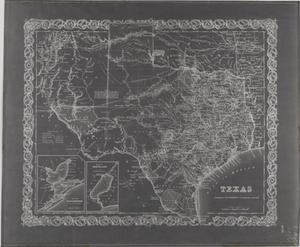 Atlas map of the state of Texas, showing proposed railroad routes and known topographical features of western Texas, and counties, towns, roads, railroads, post offices, mountains, and water bodies of eastern Texas. Map includes a note on El Llano Estacado (or the Staked Plain); a legend indicating railroads, common roads, state capitols, cities, county towns, and post offices; and two inset maps. The inset maps are located in the lower-left corner and are titled "Plan of Galveston Bay from the U.S. Coast Survey" and "Plan of Sabine Lake." Relief shown in hachures. Scale [ca. 1:4,118,400] (approximately 65 miles to the … continued below

This map is part of the collection entitled: Abilene Library Consortium and was provided by the Hardin-Simmons University Library to The Portal to Texas History, a digital repository hosted by the UNT Libraries. It has been viewed 178 times, with 6 in the last month. More information about this map can be viewed below.

"Entered according to Act of Congress, in the year 18[?], by J. H. Colton, in the Clerks Office of the District Court of the United States for the Southern District of New York."

"Note, From the head waters of the Red, Brazos and Colorado Rivers to the Rio Pecos is a desolate and sterile plain from 100 to 200 miles in width, elevated about 4500 feet above the Gulf of Mexico, without water or timber, and with a scanty vegetation."