7p
This photo of the entrance to the S. S. Miramar
gives only a hint of what a substantial structure it
was.
tion to the intrinsic value of the ring. Its loss was
"greater than death" and "no jocular matter":
I had intended to will it to the Metropolitan
Museum, where it would top all their jade
collections. . . . Cartier in Paris, Tiffany in
NewYork, had each said it was priceless as an
example of jade, and it was valued by them
at prices ranging from $1,100 to $5,000.. .
when my husband, months ago tried to coax
me to try to forget it and take my loss philo-
sophically, I but replied, with a choke in my
throat, that is (sic) was so irreplaceable, espe-
cially now since the war in China and that I
just couldn't bear it yet . . . I am heartbroken
... they do not allow jade of the kind I have
described to leave their country.45
A follow-up report the next day alluded to
an unnamed "illness" of 1936, and a long pattern
of conflict with servants over her possessions.46
The false imprisonment case against the Newtons
dissolved when it was revealed that the illiter-
ate Ricketts had signed the previous February a
written confession composed by an assistant D.A.
Ricketts sued the Newtons for $57,300 in dam-
ages; he settled for $500. Eventually the ring sur-
faced; it had been at 4005 Miramar all along.47
In 1939 Cosette built, without benefit of
permission from the township, a port cochere that
violated Highland Park's residential set-back or-
dinances; building inspectors halted construction

but did not enforce the township's order to tear it
down;48 this would prove to be a costly error for
the next two decades. When Cosette applied in
1941 to build a $250 "pergola" behind her house,
the township of Highland Park, in good faith and
in the Highland Park way, granted her a permit.
Cosette became inspired by the pergola's grow-
ing resemblance to a ship, and expanded it ac-
cordingly. She claimed to have invested $60,000
in all on her "garden ship of dreams," installing
two fully electric kitchens, a dance floor, a PA sys-
tem, powder rooms, a drink machine, an upstairs
promenade, a pilot's wheel, as well as a "purser"
named Gloria Finley who would handle book-
ings.The coup degrace: a "pergola" of steel bars and
mesh shielded the steam-heated pool from prying
eyes next door.49
Five days after the Japanese attack on Pearl
Harbor, Cosette "launched" her ship by inviting
her Highland Park neighbors to a fete for the
township's six debutantes. "Dreams are the cargo,"
was the ship's motto; "Captain" Cosette, svelte and
fashion-forward in a pants suit and high heels,
played mistress of ceremonies via a loudspeaker.
Unfortunates not invited to the party could hear
loud ship's bells, sirens, and foghorns.50 The Morn-
ing News called it "sensational"; the neighbors
were less enthusiastic. Certainly no one's dreams
that night included an expensive voyage all the
way to the Texas Supreme Court.
As Cosette began to promote the space as
a meeting place to groups such as Hadassah and
the Career Girls Defense Corps, Highland Park
authorities voiced their displeasure, with a po-
lite inquiry about her purposes. In a long, effu-
sive written response, she attempted to frame her
activities as part of a desirable strenuous war ef-
fort, entreating authorities to "allow my ship to
serve."51 Court documents would later include
her publicity materials for the yacht, to prove in-
tent to commercialize the mock yacht by provid-
ing the name of the assistant who would handle
the bookings.The Atlantic Oil Company paid her
$100 for an event she staged, a fact that would not
go unnoticed by the authorities.
The first act of local vandalism against the
property occurred in late 1942, when the New-
tons discovered the china and crystal service for
150 in the mock ship's galley shattered and strewn 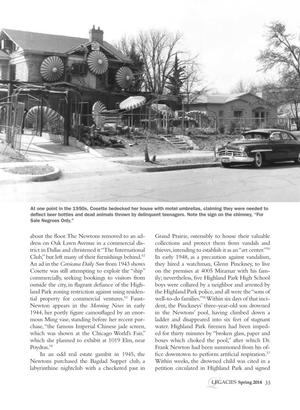 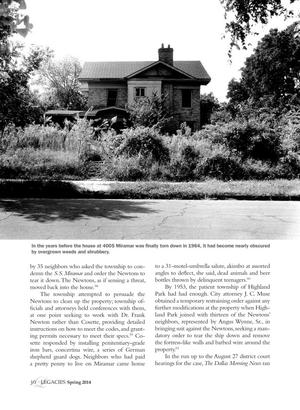 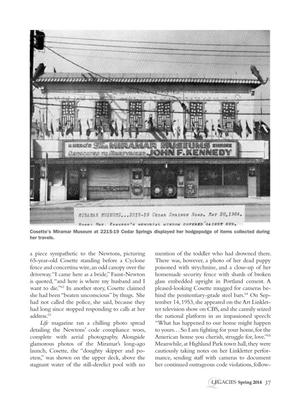 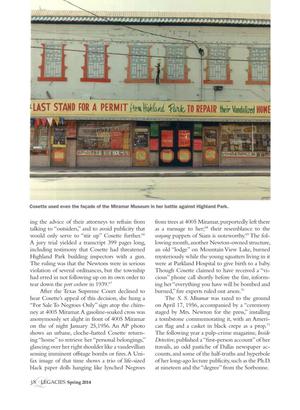