can system or "the American Way of Life," for we
known that a murderous racism is deeply inbedded
in that Way. It may be that our experience in
America makes it possible for us to extricate our-
selves from the strange and mad roles of being mili-
tary defenders of those outpost investments of Amer-
ican corporate capitalism that are to be found in
Africa and Asia and Latin America and Harlem.
For as one young man has very rightly asked, "What
in the world do black people have to defend when
we start talking about investments ?" (I think it was
Lenin who was so surprised to hear that there were
black conservatives in America. He said, "Oh, yes?
What do they have to conserve?") And if Negroes
stopped volunteering where would our ground level
combat forces be?
Surely the blackness of our countenances and the
humiliation to which we have been exposed make it
sheer madness for us even to consider destroying
other people to save American "face". And the other
American burnings that are so well recorded in
many places, the burnings of black men and women
in a thousand Southern village squares ought to
make it totally impossible for us, with any kind of
conscience or rationality, to engage now in the task
of burning other poor people for the American Way
of Life.
This isn't simply treason. It is a gift, a gift
of God. For I suspect that if we would exercise the
gift of our blackness and recognize it and hold it and
use it and share it in the way that gifts were meant
to be shared, then we might be delivered. We could
be delivered to be the brothers to the poor and to
the revolutionaries of the world. We would be
sprung from the trap of the affluent society to join
hands with all those who are seeking to build a new
kind of freedom and a new kind of man and a new
kind of world, whether they call themselves workers
of the kingdom of God or workers for the kingdom of
man. I think that our blackness, if properly seen,
might make it possible for us to be delivered from
the madness of American power, to seek a power
that grows neither out of the barrel of a gun nor
from the heat of burning jelly. The power of the
sons of God.
I think if we properly use our blackness, we shall
also be delivered from the falseness of the churches
in order to go out and to seek our Lord among his
despised and rejected brothers, wherever they may
be, whether in Vietnam or Guatemala, Peru or
Mozambique, Nashville or New York. This, I sus-
pect, is the deepest meaning of King and Carmichael
today; I think that this was the deepest meaning of
the unrealized potential of Malcolm X. Their lives
and words strongly suggest that we who are black
live now in the heart of a society that is fighting

perhaps its last great series of battles to determine
whether it shall be remembered as the most danger-
ous and cruel society in the world or whether it
shall have a chance to be a source of renewed hope
for the people of the world.
Therefore we who are black can no longer afford
to be parochial. We cannot be American first. (In-
deed, no Christian can be that!). Our gift, if it is
our gift, like all of God's gifts, is for the world.
Therefore, like King and Carmichael, we must now
speak and act for the world in the midst of the pres-
ent American situation. This means that we must
be acting and speaking again and again against al-
most everything that our national leaders identify
as the American interest in the world. For whether
we like it or not, Americans are now almost con-
sistently against the interests of the poor and the
weak and the powerless all over the world. "Na-
tional Security" for America means universal in-
security upon the earth.
This, I think, is perhaps a part of the new mean-
ing of "Let my people go." Let my people go not
from their blackness but from their bondage to
American false images and American goals. Let
my people go so that they may serve me. This, I
think, is what it means. And when we ask, How
do we serve Him-or It or whatever he is, or where-
ever he is? then I think the answer comes, and it
is this: If he is really dead, it means entering the
struggle that he did not complete-the struggle
for the children, the burning children, the struggle
for the poor, the pressed-down poor, the struggle for
the humiliated, the struggle for the weak, the strug-
gle for all those who have paid the debt for the build-
ing of a modern society without ever gaining any
of its benefits. If he is dead or if he is alive, if he
lives somewhere or anywhere or here, serving him
means going on in the spirit of that God-intoxicated
swinger of a son who was called Jesus Christ. It
means that this guy knew what he was talking about
when he said that people who are filled with com-
passionate religious fervor have good news for the
poor. They have sight to bring to the blind and
they have freedom to work for-for all of the broken
victims. This, I think, is the heart of our gift, a
sense of what it is that men are trembling about and
struggling about and seeking for, so that we are no
longer trapped by those foolish cliches about commu-
nism versus "the free world."
The gift of blackness, I think, will open our eyes
and clear our head. As I understand it, black men
may now be called upon to lead the way to a trans-
formed (and perhaps humiliated) America, not
simply for the sake of America, but for the sake of
the world. Those who are not black may wish to
follow, but I suspect that the peculiar gift in this
task is distinctly ours. For we know what it means
11 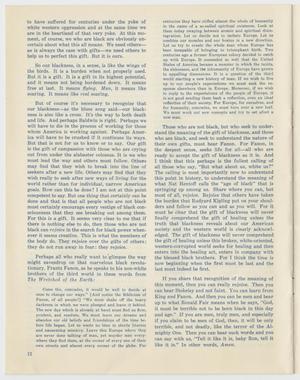 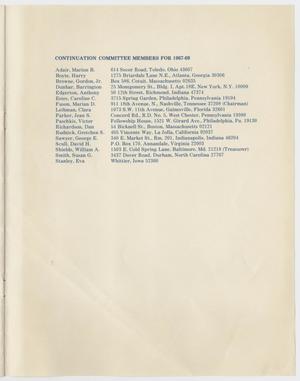 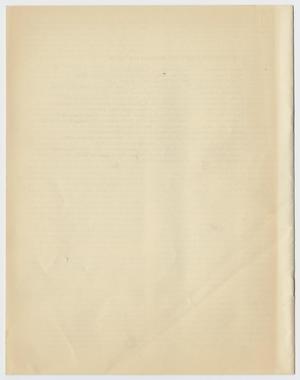