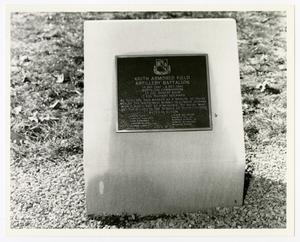 Photograph of the 495th Armored Field Artillery Battalion memorial stone, taken at the 12th Armored Division Association Dedication at Armor Unit Memorial Park in Fort Knox, Kentucky. Text on the plaque says "15 Sep 1942 - 4 Dec 1945. Battalion commanders Lt. Col. Robert Bahr, Lt. Col. Richard Hockman. We dedicate this marker as a tribute to those men of the 495th who served in combat during World War II and as a memorial to those who lost their lives in the service of their country. Killed in action: Joseph Finn, Charles Hancock, John Karnash, Leonard Klatt, George Lindley, Victor ... continued below

This photograph is part of the collection entitled: Abilene Library Consortium and was provided by the 12th Armored Division Memorial Museum to The Portal to Texas History, a digital repository hosted by the UNT Libraries. It has been viewed 88 times. More information about this photograph can be viewed below.

People who are significant in some way to the content of this photograph. Additional names may appear in Subjects below.

This Museum is located in Abilene and serves as a display and teaching museum for the study of World War II and its impact on the American people. It primarily contains 12th Armored Division World War II archives, memorabilia, and oral histories, along with selected equipment and material loaned or donated by others.

This photograph is part of the following collections of related materials.

These materials focus on WWII and the immediate postwar period of the late 1940s. In addition to materials created during the time period, materials may include modern studies and commemorative works about the era.

These photos depict the life of the 12th Armored Division during WWII. Funded by grants from the Community Foundation of Abilene and the Texas State Library and Archives Commission.