Going Downtown
To Shop
Sanger's,Titche's,Volk's and More
BY JACKIE MCELHANEY

nyone who lived within driving range of
Dallas before the 1970s will likely recognize
the names of Sanger, Titche, Goettinger,Volk, A.
Harris, and E.M. Kahn. These were the men
who established the businesses that brought
Dallas residents and those from smaller towns in
North Texas downtown to shop for nearly a cen-
tury. Most of them (or their fathers) were born
in Europe in the middle third of the nineteenth
century and found their way to America to build
lives with greater opportunity.1 The men men-
tioned above set up mercantile establishments in
Dallas as it was experiencing dramatic growth.
It all began less than a decade after the Civil
War had ended, when both the Houston & Texas
Central Railroad building northward and the
Texas & Pacific building westward had arrived in
Dallas, making it a major rail crossroad. Dallas
was transformed from a sleepy village with a half
dozen saloons (but only one place to buy
clothes) to a thriving community in 1873 with
more than 7,000 inhabitants.2 Dallas seemed a
particularly good place to open a store, as E.M.
Kahn told a reporter some seventy years after he

arrived in Dallas in 1871: "I noticed that people
here walked faster, talked faster, and thought
faster than any of the other places I'd been. I felt
for this reason that the community was going to
grow and I wanted to be a part of it."3
Kahn's assessment of Dallas was on the
money, for by 1890 the city had grown to be the
largest in Texas, and the retail clothing business
was booming.The reason was obvious when you
look at who had come to town: Alex, Philip, and
Lehman Sanger in 1872;Adolph Harris in 1887;
Max Goettinger in 1887; and Leonard Volk in
1889. Edward Titche didn't arrive until 1894, but
he made up for lost time when he met Max
Goettinger.4 These men built stores with distinc-
tive personalities, and each store had a loyal fol-
lowing.
Emanuel Meyer Kahn found an empty
building on the south side of Main Street
between Market and Austin streets and set up his
men's store on February 1, 1872, just a few
months ahead of the arrival of the Houston &
Texas Central railroad.5 His was the first true
"clothing store" in town, one known as the first 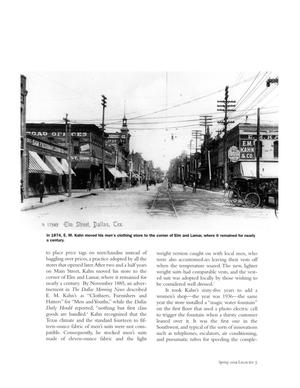 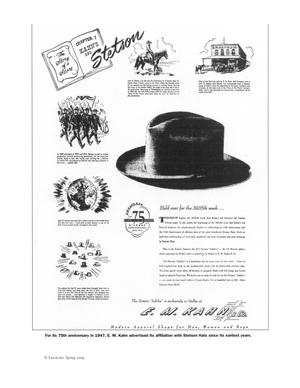 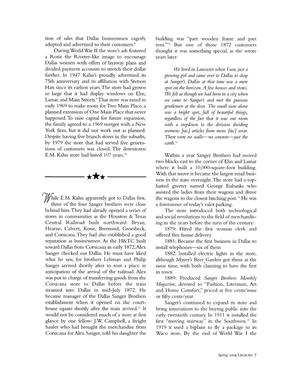 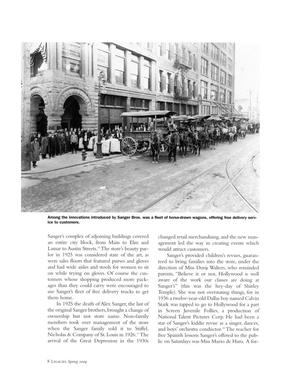